Who doesn’t love apple pie? This recipe from ibreatheimhungry is so easy and so good. When you’re craving dessert, don’t reach for the high-carb, sugary choices that knock you off your plan and set you back for days. The nutty roasted flavor of the press-in crust with a thin layer of tart apples will more than satisfy any cravings you have, without ignoring your healthy lifestyle. A springform pan will prevent the crust from overbrowning better than a pie plate, plus it makes the pie easier to serve. If you don’t have one, though, it’s still great. It’s delicious cold, too! This recipe would be for those on maintenance or special occasions. 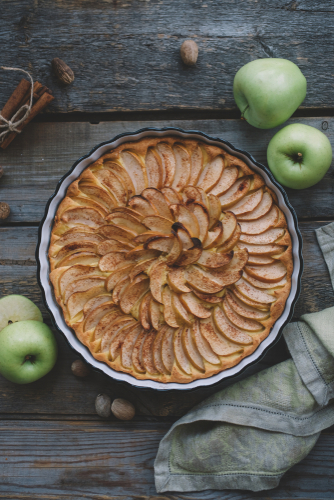 Combine the melted butter, almond flour, Swerve and cinnamon in a medium bowl. Stir until well combined and crumbly. Press the ingredients into a 10” springform pan, creating a rim about 1/2-inch high on the sides. Pre-bake the crust for 5 minutes.

Combine the sliced apples and lemon juice in a bowl. Lay the apples evenly across the bottom of the crust (either in a circular pattern or just toss them in randomly), pressing them down lightly when done.

Combine the butter, cinnamon and Swerve and heat until smooth, stirring constantly. Brush or spoon mixture evenly over top of the apples. Bake for 30 minutes or until apples are soft.

Combine the cinnamon and Swerve. Sprinkle over top of the tart. Serve warm or chilled.