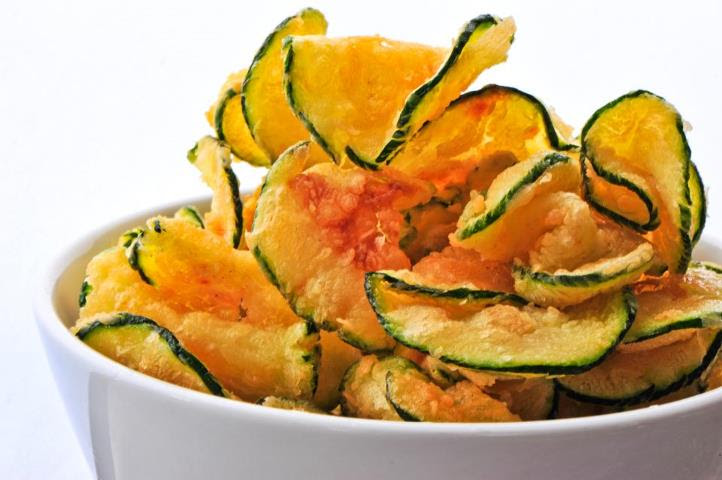 Slice the zucchini. (Using a mandolin helps keep the slices consistent.) Lay the zucchini slices on a paper towel in a single layer. Cover with more paper towels and set a baking sheet on top. Press down on the baking sheet, applying slight pressure, to help squeeze out some of the moisture.

Lightly brush the top of the zucchini with olive oil. Sprinkle slices with salt. You can also sprinkle with a little cumin and paprika for extra flavor. Flavor each baking sheet differently, if you like.

Bake for 1-1/2 to 2 hours until crisp and golden. If some chips are still flimsy or damp, remove the crisp chips and place the damp ones back in the oven for a bit longer, watching closely.

* Olive oil work fine in this recipe, as the oven temperature is much lower than the smoke point of the oil.

Let me address zucchini chips. I have tried them several times in the oven, as have many of our clients. Oftentimes the recipes are a disappointment. They require constant watching so as not to burn (many of those reviews did show burned chips), and are not as crunchy. they don't cook evenly either. The recipe link below is better with a low temp over more time. However, my fool proof way is to put them in a dehydrator for 24 hours. You can mix the sliced zucchini with extra virgin olive oil, salt, pepper, Italian seasoning, cumin, paprika, crushed red pepper or even an everything bagel seasoning - whatever you like. They are crunchy and help with that desire for a chip! You can also do other veggies this way, as well as berries or sliced apples with cinnamon (or plain). Just remember... one cup dehydrated is not the same as a cup of regular sliced veggies or fruit! This recipe calls for 10 cups sliced. Try cutting it in half (5 cups) to make it all fit onto a dehydrator, then portion out a fifth when done. I bought my dehydrator at Bed, Bath & Beyond for $48 with a coupon, but you can get them most anywhere now.

When dehydrating, veggies qualify as raw if dried at temperatures between 105 F/41 C and 115 F/46 C. That is significantly lower than the 135 F/57 C to 150 F/66 C usually recommended for drying fruits and vegetables. What this means is that if you want to dry foods but still keep their raw status, you'll need to allow for up to 1/3 longer drying time. We would still follow the 2 cups raw or 1 cup cooked rule for each meal. So, when you slice your veggies for dehydrating, measure them out in cups before you put them on the dehydrator. If you have 6 cups of sliced zucchini, then you would divide the finished product into 6 equal portions. If you dehydrated it at 105-115F, then you would have 2 of the 6 portions. If 135-150F, then 1 of the 6 portions.